Dennis is a native Californian, and attended the University of California at Los Angeles where he majored in Economics. He left UCLA in his third year, impatient to begin a career. 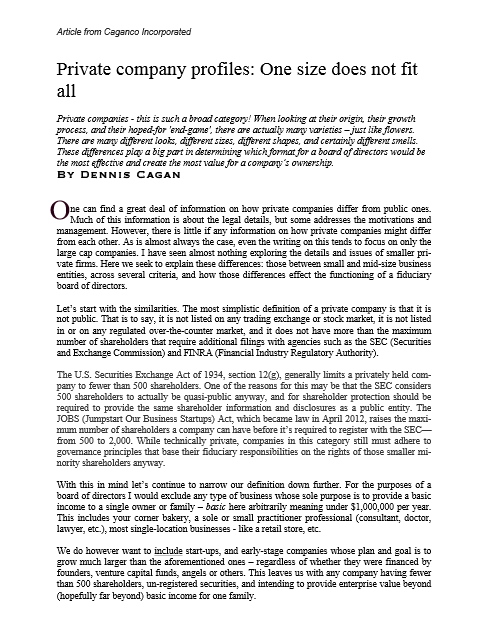 NEW ARTICLE: Private company profiles: One size does not fit all.

Private companies – this is such a broad category! When looking at their origin, their growth process, and their hoped-for ‘end-game’, there are actually many varieties – just like flowers. There are many different looks, different sizes, different shapes, and certainly different smells……

Dennis is a nationally recognized authority on private company governance and information technology, including: the Internet, software, hardware, services and communications, in the disciplines of company strategy, sales, marketing, product development and distribution channels. He has authored a multitude of articles and has spoken widely at industry conferences, to entrepreneurial organizations, and to paying corporate audiences such as Microsoft.

1967
Dennis’ technology career started in 1967 as a computer operator with IBM – actually operating a large multi-million dollar System 360 computer installation.
1968
A year later he joined Call-A-Computer, a newly formed computer timesharing company, as a salesman.
1969
From there he moved on to IPOL – Information Processing On Line, a small systems integrator (now called VAR’s), as Director of Marketing. That company evolved into a representative for a variety of computer peripheral products.
1970
Soon after, Dennis went to work directly for one of the vendors, Delta Data Systems, as their Western Regional Sales Manager. 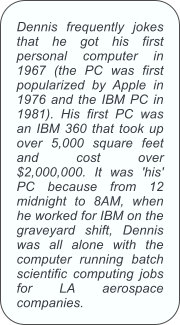 1971
In 1971 Dennis was hired as the Western Regional Sales Manager (and the first salesman) for the video display terminal division of Lear Siegler, Inc., a Fortune 500 company. At LSI he personally conceived of, and fully implemented, what many consider to be the computer industry’s first distribution program (as a company’s primary sales channel).

1975
In 1975 Dennis left LSI, along with four engineers, and became a co-founder and Vice President of Sales and Marketing for SOROC Technology, Inc., a start-up video display terminal manufacturer.

1976
In 1976 he sold his interest in SOROC to in order to found his own company – one of the earliest computer product distribution companies – The David Jamison Carlyle Corporation (DJC). The name was a fictitious name made up from Dennis’ initials.

1981
In 1981 DJC went public through a reverse merger and became listed in NASDAQ as DJCC. The firm was the period’s leading national reseller of computer peripherals and data communications equipment.

1982
DJC’s 1982 revenues reached $50 million. At various times DJC was recognized as a member of the Inc. Magazine “Inc. 100” (the magazines very first such listing); the California Business Magazine “Fastest Growing 100”, the Venture Magazine “Fast-Track 100”, and The Executive Magazine “50 Fastest Growing Companies in Los Angeles.” In 1983 a large public British firm acquired DJC. Within a year Dennis moved on.

From 1983 through 1996 Dennis was a full-time consultant through his own C Corporation, CaganCo Incorporated. During this period he was often on retainer with several clients at one time. Mr. Cagan’s consulting has always been somewhat unusual and “hands-on”, working closely with his clients. Frequently he was already a board member of a company when he stepped into an interim C-level management role. Information Technology companies both large (over $60 billion) and small have benefited from Dennis’ knowledgeable advice. Jointly with the client, he analyzes the firm’s position including: company infrastructure, competitive environment, products, existing and potential sales and distribution channels, personnel, etc. Next, all the specific issues are addressed with the development of appropriate procedures, techniques, programs, systems or strategies. Dennis has truly evolved a number of unique methods for both developing and implementing these solutions. More often than not Dennis either was, or became, a member of his clients’ board of directors.

1983
In late 1983 Dennis started a consulting relationship with the CEO of AT&T’s newly formed Computer Systems Division. Dennis advised on most of the sales and marketing aspects of AT&T’s initially successful entry into the general purpose computer business – which was one of the primary objectives on the 1/1/1984 divesture of the seven Bell operating companies. Dennis served as the key consultant on the initial strategies and implementation of AT&T Technologies’ efforts. He was the primary architect of both the overall strategy and the specific elements of AT&T’s Value Added Reseller program. After that he did the same for their Value Added Systems Distributor program. Both were somewhat unique within the computer industry at that time, and both were judged very successful.

1987
In 1978 Dennis had become the major stockholder and a Director of Design 1 Interiors – a well-known LA-based commercial interior design firm. In 1987, on a part time basis, Dennis became Senior Vice President and a Principal of the firm. Design 1 went on to become one of the world’s 25 largest full service commercial hospitality interior design firms. Eventually ranked in the top 10 on the Interior Design Magazine Top 100 Hotel and Restaurant Giants Worldwide. The firm had divisions specializing in hospitality, senior housing and model home merchandising. Design 1 was responsible for the interiors of dozens of hotels, including several Five-Star, throughout the world. The firm’s clients included Walt Disney, Donald Trump, Steve Wynn, Marriott and many more. Dennis was actively involved in the firms marketing and business development activities. He went on to become a well known speaker on commercial interior design and merchandising at industry conventions including: International Hotel/Motel & Restaurant Show, Restaurant and Hotel International Design Expo and Conference, National Association of Home Builders, Multi-Housing World, American Resort and Residential Development Association, Club Industry, Club Managers Association of America, Crittenden Golf Real Estate Development conferences, Crittenden Hotel Development Conference (as Chairman), National Association of Senior Living Industries, South Eastern Builders Conference, and others.

1990
In 1984 Dennis had helped fund and mentor some of his ex-DJC employees in two start-ups – Data Enterprise, a service firm, and Century Computer Brokers, a used computer equipment distribution firm. Soon after the boards of both companies, which included Dennis, merged them together to form Century Computer Marketing (CCM). Dennis subsequently was asked to join the management team and position it for sale by working to substantially increase the enterprises’ value. In his capacity as Senior VP of Sales and Marketing, Dennis built CCM into the global industry leader in multi-vendor personal computer service parts support. Century was one of the world’s largest independent distributors of microcomputer service parts to the computer maintenance industry (termed a fourth-party support company). During his tenure, between 1991 and 1994, Century’s annual revenues grew from $21 million to almost $50 million. In March 1994 Aurora Electronics, Inc. (ASE: AUR) acquired Century for $38 million, almost all cash. The combination of Century and Aurora created one of the computer service industries largest fourth-party support companies. Dennis served as Vice President of Corporate Marketing and Business Development for Aurora Electronics, Inc. (and Senior Vice President of Marketing for their Century Computer Marketing division). Aurora subsequently merged with the Cerplex Group (OTC/BB: CPLX). 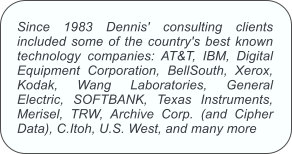 1995
StarPress, Inc. (Great Bear Technologies-NASD EBB): Dennis served as acting Chief Operating Officer/Executive Vice President. StarPress, Inc. was a highly regarded multimedia software publisher, where Dennis had been a member of the board of directors for five years. Dennis was asked to work with StarPress management as their predecessor company (Great Bear Technologies) completed the acquisition and integration of StarPress. The company then quickly entered into another merger with Graphix Zone (NASDAQ: GZON). Dennis oversaw all sales, marketing and operations activities.

1996
Software.com, Inc.: Already a member of the Board of Directors, Dennis was asked to join the company full-time for a one-year period. In 1996 he became Senior Vice President of Sales and Marketing. Software.com (NASDAQ: SWCM), known as ‘The Internet Infrastructure Company,’ was one of the most highly regarded of the Internet related startups – being ranked in Top 10 lists from Upside Magazine, Convergence Magazine and others. From January to May 1996 Dennis was responsible for all sales and marketing activities. After the acquisition of Accordance he continued as head of worldwide sales. Activities included the company’s complete sales channel strategy encompassing large Internet Service Providers, hardware and software OEMs, a formal VAR/reseller program and an active direct effort including both telemarketing and the World Wide Web. In 1997 Dennis retired his sales position but remained on the Board. The firm went public in 1999. Between 1995 and 1999 the firm’s market capitalization grew from $12M to $6B. The company subsequently was merged with Phone.com to create Openwave (NASDAQ). If you are using AT&T, Verizon or Sprint for your email, it is being delivered by the original Software.com software.

1997
Intervista, Inc.: Intervista Software, Inc. was perhaps the best-known company in Internet standards based interactive 3D software technology. The firm’s founder was the co-inventor of VRML – Virtual Reality Modeling Language. As a Board member Dennis took over for four months as Executive Vice President with responsibility for corporate strategy, sales and marketing.

1999
SOFTBANK: In late 1998 Dennis joined the board of First Virtual Holdings – an early Internet IPO. From January through April of 1999 Dennis was brought in by SOFTBANK, the controlling investor of this public company, to serve as interim CEO and reposition the company as MessageMedia, Inc. (NASDAQ: MESG). During his four month CEO tenure he moved the company from San Diego, CA to Boulder, CO. He also realigned the management team, integrated two acquisitions, initiated two additional acquisitions and moved the company’s public market capitalization from $125 million to over $1 billion. During that time the company also completed a $10 million private placement and Dennis recruited and installed a permanent CEO to replace himself. MessageMedia, acquired by DoubleClick in January 2002, was a leader in providing services based on Internet e-mail for use by corporate customers for the purpose of one-to-one customer relationship management and direct marketing.

2000-2004
In 2000 Dennis formed the Santa Barbara Technology Incubator, LLC and Santa Barbara Technology Group, LLC (SBTG). SBTG is still in business monitoring its remaining portfolio companies. When is an operational mode SBTG was a private investment and consulting firm that was originally engaged primarily in working with, and investing in early-stage technology companies. The firm long served as an important connection for any high-tech start-up on the California Central Coast. They provided world-class management assistance, strategic guidance, and valuable connections for entrepreneurs. They also provided young companies access to financing and operational and technological infrastructure. The company now consists solely of its remaining investment portfolio.

SBTG was the founder of SB Tech Ventures, which operated the ‘Incubator’ offering flexible, full-service office space for companies in downtown Santa Barbara. The ‘Incubator,’ consisted of 26,000 square feet of full-service office space available for lease to companies in Santa Barbara. In addition to state-of-the-art services and infrastructure, the facility provides the flexibility that young, growing companies need: flexible office layout systems, and flexible growth options. The Incubator gained the reputation as the most technology-friendly executive office environment on the Central Coast.

SBTG is also the founder and host of the well-known Santa Barbara Tech Brew a popular networking event for high-technology professionals. SB TechBrew is one of the best-attended and longest running technology networking events in the country. Roughly six times each year SB Tech Brew provides hundreds of professionals with a venue to exchange ideas, network, and focus on high-tech business growth in Santa Barbara. Invitations to the event are open to anyone interested in high technology who wants to actively participate in the future of the local business community.

2006
From May 2006 to May 2008 Dennis served as the Chairman, Chief Executive Officer and President of TWL Corporation (TWLP.OB) and its subsidiary TWL Knowledge Group, Inc., both based in Carrollton, Texas. TWL is a leading provider of integrated learning solutions for compliance, safety, emergency preparedness, continuing education and skill development in the workplace. Since 1986, TWL Knowledge Group has met the training and education needs of more than eight million professionals in the industrial, healthcare, fire and emergency, government, law enforcement and private security markets. The company produces and delivers education and workplace skills training content to organizations via global satellite television, the Internet and traditional media such as DVD, CD-ROM and PC-based, quasi virtual reality simulation platform.